Graffiti Art Definition, The Origins, And Facts You Need To Know. 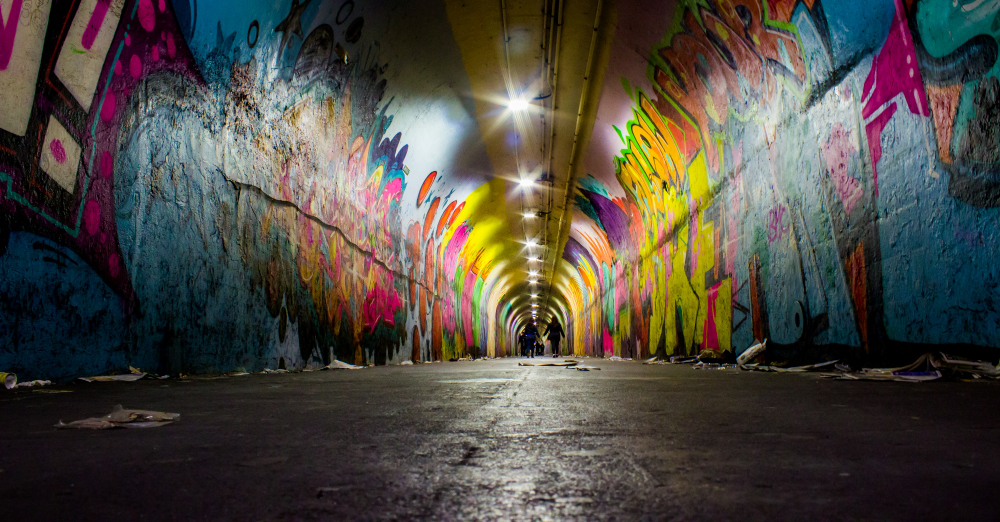 Graffiti is one of the most misunderstood art forms in the world. Many people think that it’s simply vandalism, but graffiti is a true art form with a rich history dating back to ancient times. In this blog post, we’ll explore the definition of graffiti art, its origins, and some interesting facts about this unique form of expression. So if you’re curious about graffiti art and want to learn more, keep reading!

Where did graffiti originate from?

Most historians believe that graffiti originated in Ancient Greece, where people wrote their names and messages on walls and buildings. The word “graffiti” comes from the Greek word γράφειν (graphein), which means “to write.” However, some people believe that graffiti actually originated in Rome, where people wrote on walls to make political statements or to tell stories.

Over the centuries, graffiti has been used for a variety of purposes, from expressing political views to simply writing one’s name. In more recent years, graffiti has become more associated with art and self-expression, and is often seen as a form of street art. Graffiti is still used for political purposes, but it has also become a popular way for people to express themselves creatively.

What is the true meaning of graffiti?

Most people tend to see graffiti as nothing more than vandalism and an eyesore. However, there is more to it than meets the eye. For many people, graffiti is a form of self-expression and art. It can be used to communicate messages or simply to make a statement. Graffiti can be found in all sorts of places, from city streets to public restrooms.

Despite its negative reputation, graffiti can be a positive force in the world. It can be used to spread awareness about social issues, to beautify otherwise bland environments, and to express creativity. Graffiti can also be a form of protest against injustice or inequality. In some cases, it can even be used to help solve crimes.

However, graffiti is still often seen as a negative thing. This is because it can be used to damage property, to spread hate speech, or to vandalize public spaces. Graffiti can also be a nuisance if it is not done in a respectful or considerate manner. If you’re thinking about adding some graffiti to your community, be sure to do it in a way that will not cause problems for others.

Is graffiti art or a crime?

There are many different opinions on whether graffiti is art or a crime. Some people believe that it is a form of self-expression and a way to add beauty to otherwise bland surfaces. Others view it as an act of vandalism that damages property and creates an eyesore in the community.

So, what is the truth? Is graffiti art or a crime?

What are the three major types of graffiti?

There are three major types of graffiti: tagging, throw-ups, and pieces. Tagging is the most basic and simple form of graffiti, usually consisting of a person’s name or initials. Throw-ups are slightly more complicated than tags, usually involving two colors and one or two words. Pieces are the most complex and involved type of graffiti, often involving multiple colors, shading, and intricate designs.

Is graffiti good or evil?

Some people see it as a form of art that can add beauty and character to a community, while others view it as vandalism that creates an eyesore and can lead to more serious crime. Ultimately, the decision of whether or not to allow graffiti in a community is up to the community itself.

Is graffiti vandalism or art?

The debate over whether graffiti is vandalism or art has been going on for years, with no clear consensus. Those who consider graffiti to be art often argue that it can be a form of self-expression, and that it can add beauty and interest to otherwise bland surfaces. On the other hand, those who view graffiti as vandalism often cite the fact that it is often done without permission, and can be difficult and expensive to remove.

What is good about graffiti?

Some graffiti can be quite beautiful, and it can add character to a building or area. It can also be a form of self-expression. graffiti can also be used to raise awareness about social issues.

What is the beauty of graffiti?

For some people, graffiti is an art form. It is a way to express themselves and their creativity. For others, it is simply vandalism. But whether you love it or hate it, graffiti is a part of many cities around the world.

Graffiti dates back to ancient times. One of the earliest examples was found in the ruins of Pompeii. This graffiti reads, “I have hung out here for so long, I am surprised that the roof has not fallen in on me!”

Today, you can find graffiti everywhere from subways to street corners. It is often used to communicate messages or show support for a cause. Sometimes it is simply a way to express oneself.

Graffiti can be beautiful, funny, or provocative. It can also be ugly, offensive, and destructive. But whether you love it or hate it, graffiti is a part of many cities around the world.

Is graffiti good for any society?

Graffiti can also be seen as vandalism that can damage property and make a area look run-down. So, what is the answer? Is graffiti good or bad for society?

So, what is the answer? Is graffiti good or bad for society? There is no easy answer. It depends on how you look at it.

Why is graffiti a problem?

Graffiti can be a problem for a number of reasons. It can be unsightly, it can damage property, and it can be associated with crime. Graffiti can also be a safety hazard, as it can obscure vision and make surfaces slippery. In some cases, graffiti may also contain offensive or gang-related messages. Finally, graffiti can be very difficult and expensive to remove. All of these factors can make graffiti a nuisance for communities and business owners.

Why should we stop graffiti?

There are many reasons why people should stop graffiti. It can be very harmful to both people and property. Graffiti can contain hate speech or symbols that can offend or scare people. It can also be used to mark gang territory, which can lead to violence. Additionally, graffiti can damage property and cost a lot of money to clean up.

How do you stop graffiti?

The best way to stop graffiti is to prevent it from happening in the first place. There are a number of ways to do this, including:

– Providing more legal places for people to express themselves through art, such as public murals or graffiti walls

– Creating laws and regulations that make it more difficult to commit graffiti, such as increased penalties or mandatory community service

– Quickly removing any graffiti that does occur to discourage repeat offenses

All of these strategies can be effective in reducing or eliminating graffiti in a community. It is important to tailor the approach to the specific needs and resources of the community.

What impact does graffiti have on society?

Some people may see graffiti as an act of vandalism, while others may see it as a form of self-expression. Graffiti can have both positive and negative effects on society.

On the positive side, graffiti can be seen as a form of art. It can add color and life to otherwise bland and boring surfaces. It can also be used to communicate messages of social and political importance.

On the negative side, graffiti can be disruptive and destructive. It can damage property and make public spaces less inviting. It can also be used to spread hate speech or other offensive messages.

Overall, the impact of graffiti depends on how it is viewed by those who see it. Whether it is seen as positive or negative, graffiti is likely to continue to be a part of our society.

Why is graffiti good for cities?

There are a number of reasons why graffiti can be good for cities. For one, it can add color and life to drab, gray urban environments. It can also be used to communicate important messages or to simply express oneself. Additionally, some argue that graffiti can actually help reduce crime rates by providing a outlet for expression that may otherwise lead to illegal activity. Finally, graffiti can be used to beautify and revitalize city neighborhoods.

While there are certainly some drawbacks to graffiti, such as the potential for property damage, on balance it can be a positive force in cities. You should consider the pros and cons of graffiti before making any decisions about whether or not to allow it in your city.

Yes, many people actually enjoy graffiti. It can be seen as an art form, and it can be fun to do. There are even some people who make a living off of graffiti! It can be a great way to express yourself and your creativity.

Is graffiti legal in the US?

There is no single answer to this question as graffiti laws vary from state to state. In some states, graffiti is considered a crime and can result in punishable by law, while in others, it may be considered a form of art and allowed in certain public spaces. It is always best to check with your local laws before engaging in any type of graffiti.

What is street art vs graffiti?

Both street art and graffiti can be seen as forms of expression that fall under the same umbrella. However, there are some subtle differences between the two. Street art is usually more graphic and often has a stronger message or story behind it, while graffiti is more about the tags and lettering. Additionally, street art is often seen as more legitimate and acceptable by the mainstream public, while graffiti is still considered to be vandalism by many. Ultimately, it is up to the individual to decide what they consider to be street art or graffiti.

Graffiti art is one of the most unique and captivating forms of art in the world. It has a long and interesting history, and it continues to evolve today. If you’re interested in this type of art, or if you just want to learn more about it, we’ve provided some fascinating graffiti art facts that are sure to interest you. We hope you enjoyed reading this post as much as we enjoyed writing it!

The Psychological Effects Of Different Culinary Arts On The Human Mind

Traveling On A Budget: How To Experience The Best Of Art, Music, And Food For Less

Do Pacman Frogs Have Teeth And Do They Bite? The Truth About These Strange Amphibians

Cosmetic Statistics That May Surprise You (From 20 Studies)