The Different Types Of Guitars And The Sounds They Make 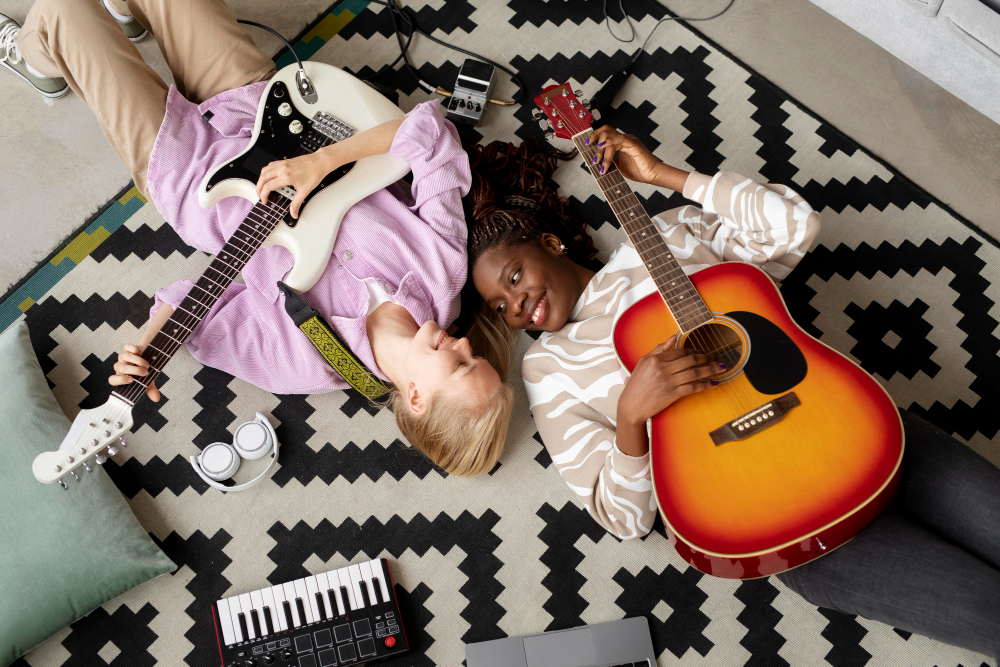 There are all sorts of guitars out there, from acoustics and electrics to classical and flamenco. Each one has its own unique tone, which can be used to create different sounds in music. Whether you’re a beginner or a pro, it’s important to understand the different types of guitars and what they can do. So let’s take a look at some of the most popular guitars out there and find out what makes them special.

Acoustic guitars are guitars that produce sound acoustically by transmitting the vibration of the strings to the air. They are typically played unplugged, without amplification. When acoustic guitars are plugged in and amplified, they can be very loud.

There are many different types of acoustic guitars, and each one has its own unique sound. Acoustic guitars are made with different body shapes, sizes, and materials. They can have different numbers of strings, and they can be played in a variety of styles.

Acoustic guitars are often used in folk music, country music, and blues. They can also be used in other genres of music, such as rock and jazz. Acoustic guitars are a popular choice for beginners, because they are relatively simple to play. Many people enjoy the challenge of learning to play an acoustic guitar.

Renaissance guitars are known for their warm, mellow sound, while Baroque guitars have a brighter, more vibrant sound. If you’re looking for a guitar that can be used for both classical and contemporary music, then a Renaissance or Baroque acoustic guitar would be a great option.

Classical guitars, also known as Spanish guitars, are typically played unamplified. They have nylon strings and a smaller body than other acoustic guitars, which gives them a mellower sound. Classical guitars are often used for classical and flamenco music.

The flat-top guitar is the most popular type of acoustic guitar. It has a round sound hole and a flat top with a raised string guard. The strings are anchored to the body of the guitar at the bridge. The sound of this type of guitar is very versatile, making it ideal for a wide range of musical styles.

An archtop acoustic guitar is a type of guitar that has a curved top and a hollow body. The sound of this guitar is very full and rich, making it a popular choice for jazz and blues musicians.

These guitars have a metal cone placed inside the body which amplifies the sound. Dobros are played with a pick, while slide or bottleneck style is used for resonator and resophonic guitars. These guitars are mainly used in country, blues and slide guitar styles.

Steel guitars are guitars that have steel strings. They usually have a shiny, metallic sound and are used in country music. The most popular type of steel guitar is the pedal steel guitar, which has pedals that can be pressed to change the pitch of the strings.

An acoustic bass guitar is a bass guitar that uses only acoustic means to produce sound. This can be accomplished by using an acoustic body, piezoelectric pickups, or a combination of the two. Acoustic bass guitars are typically larger than regular guitars, and have a hollow body that helps amplify the low frequencies produced by the strings.

An electric guitar is a guitar that uses one or more pickups to convert the vibration of its strings into electrical signals. The signal can then be electronically amplified to produce sound through a loudspeaker.

Fender introduced the mass-produced Stratocaster in 1954, and the Telecaster in 1951. These guitars have become the most popular guitars in the world, and are widely used in all genres of music.

The Seven-string and eight-string electric guitars are guitars with seven or eight strings, respectively. These guitars are relatively new additions to the world of guitars, and as such, there is still some debate as to their exact classification. Some people consider them to be simply extended versions of the six-string guitar, while others argue that they are a separate category altogether. Regardless of how they are classified, though, these guitars are becoming increasingly popular, especially among metal and hard rock musicians.

So, what exactly do these extended-range guitars sound like? In general, they tend to have a fuller, richer sound than their six-string counterparts. The low end is particularly pronounced on seven- and eight-string guitars, giving them a heavier sound that is perfect for metal and hard rock. Of course, as with any instrument, there is a lot of variation in the sound of extended range guitars, depending on the make and model of the guitar, as well as the player’s own style.

The electric bass guitar is typically played with a pick, or plectrum. The right hand may also be used to pluck the strings directly, as well as to fret the strings (stop the string by pressing it against a finger on the fingerboard).

The electric bass guitar has a wide range of tones that can be achieved by adjusting the volume and tone controls. The bass guitar can also be connected to a variety of electronic effects pedals, which are used to alter the sound of the instrument.

Which guitar is best to buy for beginners?

Ultimately depends on what kind of music the beginner would like to play. However, some guitars are better suited for certain styles of music than others. For instance, an acoustic guitar might be better for someone who wants to play folk or country music, while an electric guitar would be more suitable for someone interested in rock or metal. Ultimately, it is important to choose a guitar that the beginner feels comfortable with and enjoys playing.

Which guitar is easiest to play?

Which is the best guitar brand?

There are many great guitar brands out there, each with their own unique sound. Here is a list of some of the most popular guitars and the sounds they make:

Ibanez – Ibanez guitars are known for their high quality and great playability. They offer a wide range of sounds, making them perfect for any style of music.

ESP – ESP guitars are used by some of the world’s top guitarists. They are known for their excellent craftsmanship and great sound.

These are just a few of the many great guitar brands out there. Each has its own unique sound that can be used for any style of music. So, when you’re trying to decide which is the best guitar brand for you, it really depends on what kind of sound you’re looking for. Experiment with different brands and styles until you find the perfect one for you.

Is it okay to buy cheap guitars?

There are different types of guitars available in the market and each one produces its own unique sound. Buying a cheap guitar may not produce the best sound quality, but it is still possible to find decent sounding guitars at an affordable price. It is important to know what you’re looking for in a guitar before making a purchase and to also be aware of the different types of guitars available.

Can I teach myself guitar?

This is a question that plagues many would-be guitar players. The short answer is yes, you can teach yourself guitar. However, whether or not you will be successful at it depends on a number of factors. One important factor is what type of guitars you are interested in playing. Different types of guitars often require different techniques and styles of playing.

In general, self-taught guitarists tend to have more success if they focus on one specific type of guitar. If you try to learn multiple types of guitars at the same time, you will likely become frustrated and give up. It is important to find a style of guitar that you are passionate about and stick with it.

There are a few different types of guitars that you might want to consider learning how to play:

No matter what type of guitar you ultimately choose to play, remember that practice makes perfect. The more you play, the better you will become at it. With time and patience, you can teach yourself how to play any type of guitar.

Is it better to start with electric or acoustic?

This is a question that often comes up when people are trying to decide which type of guitar to buy. There are pros and cons to both types of guitars. Electric guitars are typically easier to play, because the strings are thinner and the action is lower. Acoustic guitars have a fuller, richer sound, but they can be harder to play because the strings are thicker and the action is higher. Ultimately, it comes down to personal preference. If you’re not sure which type of guitar you want, it might be a good idea to try both types out before making a decision.

How many hours should you practice guitar a day?

It depends on many factors such as how long you have been playing, how much experience you have and how good you want to become. However, a good rule of thumb is to practice for at least 30 minutes a day.

Can I play electric guitar without an amplifier?

Is bass easier than guitar?

This is a question that many people ask when they are trying to decide which instrument to learn. The answer is not always simple, as it depends on a variety of factors. For instance, some people may find guitar easier because it has fewer strings than bass. Others may find bass easier because the frets are larger and spaced further apart, making it easier to form chords. Ultimately, the best way to determine which instrument is right for you is to try both and see which one you prefer. Whichever instrument you choose, be sure to practice regularly and have fun!

So, what type of guitar do you want to buy? Do you want the bright sound of a classical guitar or the mellower sound of an acoustic guitar? Maybe you’re looking for the deep tones of a jazz guitar. Whichever one you choose, make sure to take the time to learn about its unique features and how to play it properly. With just a little practice, you’ll be able to create beautiful music that will touch people’s hearts.

125 Short Poems About The Arts: Poems That Will Inspire You