Soak Up The Good Vibes With These Bath Styles From Around The World! 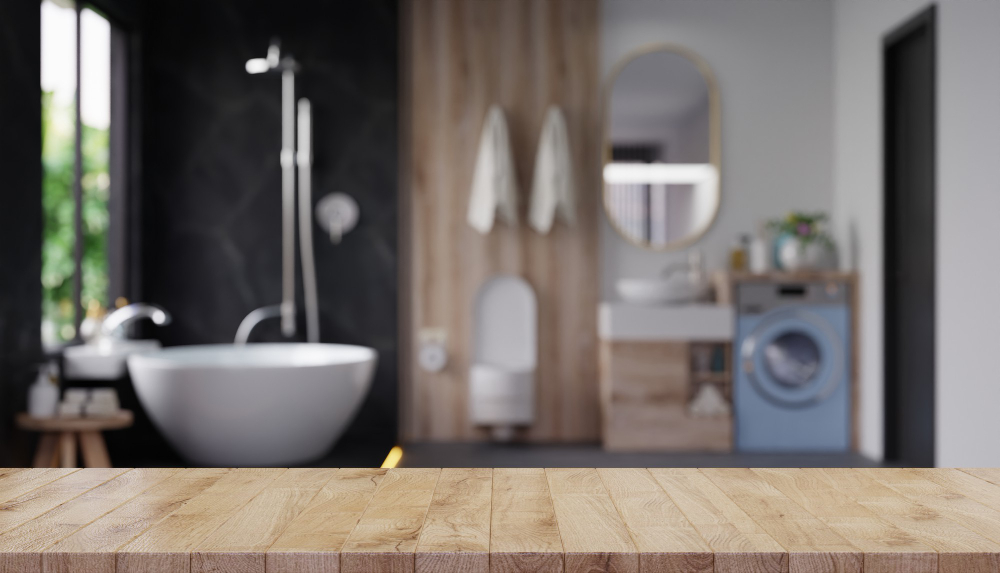 Looking to switch up your bath time routine? From Japan to India, check out these unique bath styles from around the world! With so many different options, there’s sure to be one that you’ll love. Whether you’re a fan of soaking in hot water or lounging in a cool pool, these baths offer a unique and relaxing experience. Soak up the good vibes and de-stress with a soak in one of these amazing baths.

Japanese-style soaking tubs are becoming increasingly popular in the western world as people learn about the many benefits of taking a relaxing soak. These tubs are typically deeper than standard bathtubs, and they often have built-in seats or benches to make the experience even more comfortable. Soaking in one of these tubs can help to improve circulation, ease muscle aches and pains, and promote better sleep. If you’re considering adding a Japanese-style soaking tub to your home, there are a few things you should keep in mind.

First, you’ll need to choose the right size tub for your space. These tubs come in a variety of sizes, so it’s important to select one that will fit comfortably in the room where you plan to use it. You’ll also need to decide whether you want a freestanding tub or one that’s designed to be installed against a wall.

Once you’ve selected the perfect tub, you’ll need to choose the right location for it. Japanese-style soaking tubs are typically placed in bathrooms, but they can also be used outdoors in gardens or on patios. If you’re using your tub indoors, make sure the room is well-ventilated to avoid condensation buildup.

Finally, you’ll need to select the right type of water for your soaking experience. Most Japanese-style soaking tubs are designed to be used with cold water, but some people prefer to use hot water. If you’re using your tub outdoors, make sure the temperature of the water is comfortable before you get in.

Turkish hammams are baths that have been used for centuries. They were first built in the 14th century and were used by the Ottoman Turks. Hammams were designed to be places where people could go to relax and cleanse themselves. The Ottomans believed that cleanliness was next to godliness, so they made sure to build these baths in every city they conquered.

Hammams were not just places to cleanse the body, but also the mind and soul. The Ottomans believed that hammams were places where people could escape the stresses of daily life and find inner peace.

Nowadays, Turkish hammams are still popular. They are a great place to relax and escape the everyday hustle and bustle. If you ever find yourself in Turkey, be sure to visit one of these beautiful baths!

The Russian Banya is a very important part of Russian culture. It is a steam room that is used for cleansing the body and relaxations. Russians have been using banyas for centuries, and they are still an important part of many people’s lives.

Banyas are typically made of wood, and they have a stove that is used to heat up the room. The temperature in a banya can range from very hot to very cold, depending on what the person wants. There are also different types of banyas, such as wet and dry banyas.

Jjimjilbang (찜질방) is a type of Korean sauna that first became popular in the 1980s. These saunas are usually open 24 hours and have a variety of amenities such as gender-segregated baths, massage rooms, sleeping areas, and TV rooms.

Jjimjilbangs are a popular destination for families, friends, and couples looking to relax and unwind. Many people believe that spending time in a jjimjilbang can have health benefits such as improving circulation, relieving stress, and helping with skin conditions.

If you’re planning on visiting a jjimjilbang, here are a few things to keep in mind:

– Most jjimjilbangs require you to take off your shoes before entering. There will usually be a place to store your shoes near the entrance.

– Many jjimjilbangs have an “arena” where people can socialize, watch TV, or play games. This area is usually mixed-gender.

– Most jjimjilbangs have a variety of different baths, saunas, and massage rooms. You may have to pay extra for some of the more premium services.

– Jjimjilbangs usually have sleeping areas where you can rest or spend the night. These areas are usually gender-segregated.

– You can usually find jjimjilbangs in urban areas such as Seoul, Busan, and Daegu.

Saunas are an important part of Finnish culture, and have been used for centuries as a way to relax and unwind. There are many different types of saunas, but the most popular is the Finnish sauna.

Finnish saunas are typically quite large, and can accommodate up to 20 people at a time. They are usually made of wood, and have a stove in the corner that is used to heat the sauna.

Saunas are usually used for about 15-20 minutes at a time, and then people take a break to cool down. This can be done by taking a dip in a cold pool, or simply by sitting outside the sauna for a while.

After the sauna, it is customary to take a shower. This helps to clean the body and also to cool down.

The Roman baths were a public bathing facility in ancient Rome. The baths were used for social, religious, and hygienic purposes. The Romans built the first public bathhouses in the 2nd century BC.

The Roman baths were one of the most popular places in the city. They were a place where people could relax, socialize, and stay clean. The baths were open to everyone, rich and poor alike.

The Roman baths were often very large and elaborate. They usually had a series of rooms, each with its own purpose. The most common room was the caldarium, or hot room. This room had a hot bath, a cold pool, and a steam room.

The Roman baths were not just for bathing. They were also used for social gatherings and recreation. People would play games, listen to music, and even gamble in the baths.

The Roman baths fell out of use in the 5th century AD. The decline of the Roman Empire and the rise of Christianity led to a change in attitudes towards public bathing. bathing became seen as a sinful activity and the public baths were gradually abandoned.

Despite the decline of the Roman baths, they have left a lasting legacy. The concept of the public bathhouse was adopted by other cultures and can still be seen in modern day Japan and Turkey. The word “bath” is even derived from the Latin word “balneum”, meaning bath.

A riad is a traditional Moroccan house or palace with an interior garden or courtyard. Riads were built for privacy and protection from the hot summer sun and noise of the city streets, and they often have high walls and cool, shady courtyards. The word “riad” comes from the Arabic for “garden.”

Riads were once the homes of the wealthy and powerful, but today they are available to anyone who wants to experience traditional Moroccan architecture and hospitality. Many riads have been converted into hotels, and they are a popular tourist destination.

Ayurveda is an ancient system of medicine that originated in India. Ayurvedic spas are based on the principles of Ayurveda and offer treatments that are designed to promote balance and well-being.

Ayurvedic spa treatments may include massages, body wraps, facials, and other therapies that are meant to rejuvenate the body and mind. Ayurvedic spas often use natural ingredients, such as herbs and oils, in their treatments.

If you are looking for a way to relax and rejuvenate, an Ayurvedic spa may be just what you need. Here are some of the best Ayurvedic spas in India.

The Kerala Ayurvedic Health Resort is located in the beautiful state of Kerala. The resort offers a variety of Ayurvedic treatments, as well as other health and wellness services.

Guests of the resort can choose from a variety of massage therapies, body wraps, and facials. The resort also offers Ayurvedic consultation and treatments for specific health conditions.

The Kerala Ayurvedic Health Resort is an ideal place to relax and rejuvenate. The resort’s natural setting and its commitment to providing quality Ayurvedic treatments make it a great choice for those seeking an authentic Ayurvedic experience.

Soak in the beauty of nature with an Australian Bush Bath. These baths are made from natural materials and designed to fit in with the surrounding environment. They are a great way to relax and unwind, and you’ll love the feeling of being surrounded by nature.

Australian Bush Baths are available in a range of sizes and styles, so you can choose the perfect one for your needs. They’re easy to set up and take down, and you can even take them with you when you travel.

If you are looking for a luxurious and relaxing way to unwind, consider investing in a Scandinavian Hot Tub. Scandinavian Hot Tubs are some of the most stylish and well-crafted tubs on the market, perfect for those who appreciate quality and design.

What makes Scandinavian Hot Tubs so special? First, they are made with high-quality materials that are built to last. Second, they feature a unique design that is both stylish and functional. Third, they come with a variety of features and options that allow you to customize your tub to meet your specific needs.

When it comes to choosing a Scandinavian Hot Tub, there are a few things you should keep in mind. First, you need to decide what size tub you want. There are a variety of sizes available, so you can find one that fits your space and needs perfectly. Second, you need to decide what type of material you want your tub to be made out of. There are a variety of materials available, including wood, acrylic, and even stainless steel.

Third, you need to decide what type of features you want in your Scandinavian Hot Tub. There are a variety of options available, including heaters, jets, and even massage options. fourth, you need to decide how many people you want to be able to use your tub at one time. There are a variety of sizes available, so you can find one that is perfect for your family or group of friends.

Finally, you need to decide where you want to place your Scandinavian Hot Tub. There are a variety of locations available, including indoors and outdoors. You can also choose to have your tub installed above ground or in-ground.

So, next time you’re feeling low and need a pick-me-up, why not try out one of these unique bath styles from around the world? Who knows – maybe you’ll find your new favorite way to relax and rejuvenate!

How To Shop For A New Bank: Tips For Finding The Right Fit

How To Get The Perfect Movie-Star Hair (Without A Stylist)