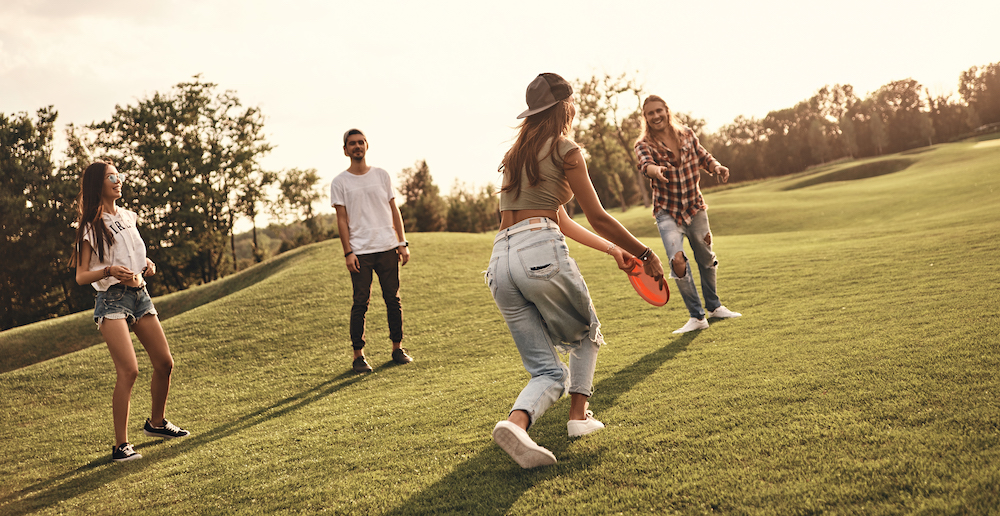 What could be more fun than spending a beautiful day outside with friends, playing some flying disc games? From classic Frisbee to newer variations, there’s something for everyone to enjoy. Here are thirteen of our favorites!

Disc dog is a sport that involves throwing a disc for a dog to catch. The sport can be played solo or in teams of two. There are many different types of discs used in the sport, but the most popular is the Frisbee. Disc dog competitions are held throughout the United States and around the world. Dogs that participate in disc dog competitions must be well-trained and able to catch discs accurately. Many disc dogs also perform tricks while catching the discs.

Disc golf is a sport that is played outdoors by throwing a disc at a target. The object of the game is to throw the disc into the basket in as few throws as possible. The player who completes the course in the fewest number of throws wins the game. Disc golf can be played by individuals or teams.

Disc golf is a relatively new sport, but it is growing in popularity. The first disc golf course was built in the 1970s. Today, there are more than 3,000 courses in the United States alone. The International Disc Golf Federation (IDGF) is the governing body for disc golf. They organize tournaments and set rules for the game.

Disc golf is a great sport for people of all ages. It is a challenging game that requires skill, strategy, and athleticism. It can be played outdoors or indoors on a course that has been designed specifically for disc golf. There are many different types of discs that can be used for the sport, including putters, midrange discs, and drivers.

If you are interested in learning more about disc golf, visit the IDGF website at www.idfg.com. You can also find a course near you by using the Course Locator on the IDGF website. Get out there and give disc golf a try! You may just fall in love with this exciting new sport.

Urban disc golf is a relatively new phenomenon, and is played much like traditional golf, but with discs instead of clubs and balls. The goal is to throw the disc into a metal basket located at the end of each “hole”, much like you would with a golf ball. The player with the fewest throws (or strokes) wins the game.

One of the great things about urban disc golf is that it can be played pretty much anywhere there are trees and/or obstacles – which is pretty much everywhere! This makes it an ideal activity for city-dwellers who don’t have access to traditional green spaces. There are even dedicated urban disc golf courses in some cities, such as San Francisco and Austin.

If you’re interested in giving urban disc golf a try, be sure to check out the PDGA website for a list of local courses. And remember, always use caution when playing near roads and other hazards. Have fun and happy throwing!

A Dodge disc is a flying disc sport that was created in the early 1990s. The game is played by two or more players and can be done either indoors or outdoors. Players try to throw their Dodge disc at the other player(s) while avoiding being hit themselves. The game is similar to dodgeball, but with a flying disc.

Another popular variation is doubles play. In this version, two players work together to try and hit the other player(s) with their Dodge disc. If a player is hit, they are out of the game. The game continues until one team is left standing.

Dodge disc can also be played with three or more players, but the gameplay can get a bit chaotic with more than two players.

No matter what variation you decide to play, Dodge disc is a fun and exciting sport that will keep you on your toes!

A double disc court (DDC) is a playing surface for the flying disc sports game Ultimate and some related games. It is a rectangular area with boundaries defined by two long parallel lines running its length and two shorter lines perpendicular to them at each end. The field is typically marked with a center line, end zones, and other markings as needed.

The game of Ultimate was developed on traditional American football fields, which are about 100 yards long and 50 yards wide. When Ultimate began to be played more internationally, it was soon discovered that these dimensions were not suitable for all global locations. For example, in Japan the long field dimension was shortened to about 80 yards because of smaller playing areas available. To accommodate this trend and to create a standardized field size for worldwide play, the International Flying Disc Federation (IFDF) developed the double disc court (DDC) in 2004.

The DDC is a rectangular area with boundaries defined by two long parallel lines running its length and two shorter lines perpendicular to them at each end. The field is typically marked with a center line, end zones, and other markings as needed. It is slightly smaller than a traditional football field, measuring 80 yards long by 40 yards wide. This allows for a playing area that is still large enough to be interesting and challenging, while also being suited to more locations around the world.

Freestyle flying disc sports can be a lot of fun to watch, and it is also a great way to improve your throwing and catching skills. If you are interested in learning more about this exciting sport, be sure to check out the Freestyle Flying Disc Association website. There you will find information on upcoming competitions, as well as video tutorials that can help you learn the basics of freestyle flying disc sports.

Fricket is a flying disc sport that was invented in the 1970s. It is similar to Ultimate Frisbee, but has some differences. Players attempt to catch the disc and then throw it back to another player. The game is played on a rectangular field with end zones at each end. There are two teams of seven players. The object of the game is to score points by throwing the disc into the other team’s end zone. Fricket can be played indoors or outdoors.

Frisbee is a sport that involves throwing a disc-shaped object at someone else, and then catching the disc. It can be played either competitively or casually. The aim of the game is to throw the disc so that your opponent cannot catch it, or to catch the disc yourself. There are many different ways to play Frisbee, and people can come up with their own rules depending on what they are comfortable with. Some of the most popular Frisbee games include Ultimate Frisbee, Disc Golf, and Freestyle.

The Goaltimate sport is a disc sport that is very similar to Ultimate Frisbee, but it is played with a smaller and heavier disc. The object of the game is to score by catching the disc in the opponent’s end zone. The game is played on a rectangular field that is about 50 yards long and 30 yards wide. Two teams of seven players each compete against each other. There are two 10-minute halves, and the team with the most points at the end of the game wins.

KanJam is a unique game that can be played by two or more players. The game consists of tossing a disc back and forth between players, and attempting to score points by either catching the disc in the kan or flying it into the goal. The first player to reach 21 points wins the game. KanJam can be played indoors or outdoors, making it a perfect game for any time of year. Players of all ages can enjoy KanJam, making it the perfect party game.

A hot box game is a game where players attempt to collect as many disks as possible by taking them from the central hot box and placing them into their own individual boxes. The player with the most disks in their box at the end of the game wins. This fun and interactive game is perfect for family gatherings, parties, or any other social events!

If you’re looking for a new and exciting game to add to your next gathering, be sure to try out the hot box game! This game is perfect for all ages and can be played with as few as two people or as many as ten. So gather your friends and family and get ready for some fun!

Ultimate flying disk sport, also known as ultimate frisbee, is a non-contact team sport played with a flying disc. The objective of the game is to score points by throwing the disc to a teammate who is in the opposing end zone. Players cannot run with the disc and must throw it immediately upon catching it. Ultimate flying disk sport is believed to have originated in the United States in the early 1970s. It has since grown in popularity, and there are now leagues and tournaments worldwide.

If you’re looking for a fun new way to get active and spend time with friends, look no further than flying disc sports. These 13 activities are sure to get your heart rate up and provide hours of entertainment. So grab some friends and head outdoors for some good old-fashioned fun.

118 Painting Techniques: Gain The Skills To Transform Your Paintings

How To Create A Romantic Ambiance With Bedding

The Importance Of Trees In Human History And Culture